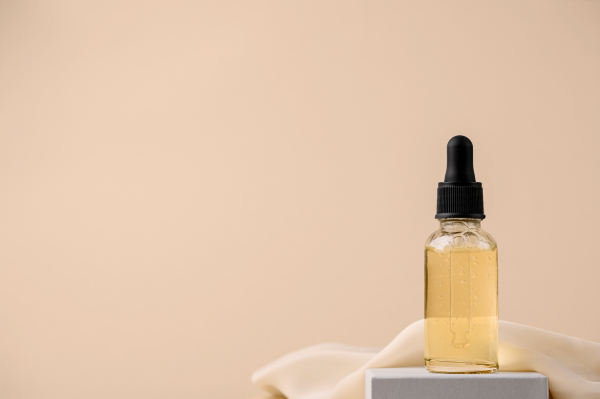 How is Jojoba Oil Used in Skincare?

Jojoba oil has been used for hundreds of years as a moisturizer that heals dry skin. More recently, it has been used in cosmetic formulations because of its anti-aging and healing properties for the skin. Not all skincare oils have the same advantages as jojoba oil, which remains a great choice to use in personal care products for a variety of reasons.

What is Jojoba Oil?

Jojoba oil is the liquid that comes from the seeds of the jojoba plant, which is native to southern California, southern Arizona, and northwestern Mexico. It has been used for hundreds of years by Native Americans to treat sores and wounds.

Jojoba seeds are hard and light brown, with a high wax content. The seeds are gathered and pressed to remove the oil. The oil makes up about half of the weight of the jojoba seed. In its natural state, it has a clear golden appearance with a nutty odor, but once refined it is colorless and odorless.

What is Jojoba Oil Comprised Of?

Often times, the terms jojoba oil and jojoba wax are used interchangeably to describe what is extracted because the wax is made of about 97% of mono-esters of fatty acids, such as oleic, palmitic, and stearic acids. There is also a small portion that is triglyceride esters, unlike other oils like grapeseed and coconut that contain more triglycerides. It also contains crude protein and fiber and limiting amino acids like lysine. The composition of the oil gives it a long shelf-life and resistance to high temperatures. Its pH level is close to that of the moisturizer sebum naturally produced by the skin so it is very soothing.

Because jojoba contains nutrients like Vitamin E and B, as well as antioxidants such as copper and zinc which nourish the skin. For the highest level of antioxidants and nutrients and the most benefits for the skin, the oil should be organic and cold-pressed.

Benefits of Jojoba Oil for the Skin

The properties of this oil make it beneficial for the skin, including:

Who Can Use Jojoba Oil for the Skin

Jojoba oil can be used by just about everyone, but it is especially a good choice for those who have dry skin or redness. People with acne-prone or oily skin will find that products that contain this oil does not exacerbate their skin issues because it does not clog pores or cause acne. Since it does not leave a greasy residue even those with oily skin can use it to help balance their skin’s appearance.

Because jojoba oil for the skin is extremely gentle, it will not irritate those with sensitive skin.  It is even recommended for those people with psoriasis and eczema because it is so gentle.  Applying it to compromised skin can help reduce flare-ups associated with these conditions.  There are no known reactions to this oil, but those users that are concerned should perform a patch test prior to using on the face. It is rare that it will cause a reaction, however.

How to Use Jojoba Oil for Skin

The addition of jojoba oil to a skincare product can results in healthy, smooth skin. The oil can be used in lotions, creams, masks, or serums. Users can apply the product in the evening before bed and again in the morning for particularly troublesome skin issues. The product containing the jojoba oil should be used on clean, dry skin and after any other serums.  When paired with other ingredients, it can help boost the product’s potency and benefits for the skin.

Cold-pressed varieties of the oil retain more of the plant’s antioxidants. A reputable skin care product manufacturer like Evora can ensure that the jojoba oil is pure so that its effects are at the maximum.  If you are interested in incorporating jojoba oil benefits for skin into one of your products, Evora can help.

The Benefits of Grapeseed Oil for Skin

What are the Benefits of Vitamin C in Skincare?

If you're a vendor, please fill out this form. Any vendors who don't fill this won't be considered

Subscribe to get notified about new products,ingredient trends, and skincare industry news.
You can unsubscribe at any time.